You are here: Knowledge Base of vpsFree.org » manuals » vps » Datasets
Trace: • Datasets
manuals:vps:datasets

Dataset is a term from the ZFS filesystem that we're using everywhere. You can imagine it as a formatted partition on disk containg directories and files. For example, btrfs has a similar concept called subvolumes.

The dataset in vpsAdmin directly represents the ZFS dataset on the hard drive. Datasets are used for VPS (each VPS has its own dataset) and NAS data. A VPS dataset can be used the same way as an NAS, but are located in different locations (VPS details and the NAS menu). The operations you can carry out with them are the same, such as creating snapshots, restoring to snapshots or mounting datasets to VPS.

Why should we even bother with datasets? Especially because of the option to set quotas and ZFS properties for various data/apps. 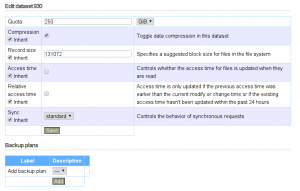 You can use the properties to optimize database performance, etc. In most cases you don’t need to deal with them at all.

Dataset Size and the Space Taken Up

Available space displays free space in the current dataset in relation to its set quota.

In the case of VPS, we don’t want the space taken up by snapshots to be included in the taken up space since this would reduce the VPS drive size by the amount of data that all the created snapshots take up. Each dataset is separate and it doesn’t share space with its parent datasets, nor with its children.

On the other hand, NAS uses the Quota property, which includes the space taken up by snapshots and subdatasets. If snapshots are made on the NAS, they will take up space from the total. It plays no role that the NAS subdataset can be assigned a bigger quota than the user has at their disposal since it is the quota from the top-level dataset that is applied, i.e. in the default state the value is 250 GB.

This means thatin order to create a VPS subdataset, we first need to free up space, i.e. another VPS (sub)dataset needs to be shrunk by at least 10 GB. On an NAS, only the quota from the highest-level dataset is applied and the subdataset quotas can have any settings.

Mount NAS Dataset to a VPS

For VPS using vpsAdminOS, create an export and mount it inside the VPS using NFS.

If the VPS is running on vpsAdminOS, vpsAdmin mounts are used only to mount VPS subdatasets. NAS datasets and snapshots are mounted using exports.

Mounts can be seen in the VPS details:

We do not recommend nesting mount points in the incorrect order. The situation when a one/two dataset is mounted above the one dataset has not been solved. 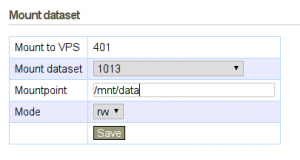 Mounts can be temporarily disabled using the “Disable/Enable” button. This setting is persistent between VPS restarts.