You are here: Knowledge Base of vpsFree.org » manuals » vps » Backups
Trace: • Backups
manuals:vps:backups

Backups are implemented using ZFS snapshots. A snapshot captures the state of the dataset and all data in it at the time of its creation. If the data are later changed, you can still access the data as it was when the snapshot was created. You can read data from snapshots or restore dataset to a snapshot, but that will delete all data changed or added since the snapshot was created.

Snapshots can be seen and created in the Backups menu. 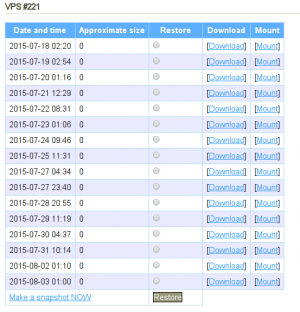 VPS backups are made every day at 1:00 AM, when each node creates a snapshot of all the datasets at once. Then the snapshots are moved to backuper.prg. Snapshots are kept for 14 days, older snapshot are deleted. In addition to these daily snapshots, you can create 6 extra snapshots. The created snapshots cannot be deleted, you have to wait until they are automatically deleted by daily backups.

Beware! NAS is not backed up to backuper.prg. Snapshots are local only and their only purpose is protection against the damage or unwanted deletion of data.

Restoring a VPS from a backup (snapshot) works the same way as it has until now. Restoring always works on the dataset level. If a VPS has subdatasets, rootfs is restored from the backup, subdatasets are not restored. I.e. it is possible to restore any dataset and this doesn’t have any effect on other datasets.

You can only make snapshots of an NAS manually. Since it is not backed up to the backuper, the restore process behaves the same way as zfs rollback -r, i.e. restoring to an older snapshot deletes all newer snapshots. It is an irreversible operation.

In order to restore data from a backup on an NAS without deleting snapshots, mount the selected snapshot to a VPS and copy the data.

Backups can be either downloaded through an online interface or a CLI. The CLI has the advantage of not having to wait for an e-mail with a link to the backup download location – we can start the download immediately or automate the whole process. We can either download a tar.gz archive or the ZFS data stream directly (even incrementally).

An incremental backup only contains the data that has changed since the previous snapshot. In order to help the client identify which snapshots can be downloaded incrementally, each snapshot contains a history indicator (number). Snapshots with the same identifier can be moved incrementally. The history flow can be interrupted by a VPS reinstallation or using a backup to restore. Afterwards, the history identifier is increased by 1 and the full backup needs to be downloaded again.

The history identifier is shown in the table with a list of snapshots in the Backups menu.

Downloading the Backup as a File

If the snapshot ID isn’t passed on to the program as an argument, it displays an interactive prompt:

We can either let vpsAdmin name the file (SnapshotDownload#Show.file_name), or choose our own location using the --output option. If --output=- is used, the output is redirected to stdout.

The program enables pausing the download (you need to use CTRL+C) and then resuming it again. If the --resume or --force options are not used, the program asks the user whether it should resume the download or start over.

The download can only start if the prepared file has not been deleted on the server in the meantime (the -[no-]delete-after option), which takes as long as a week since the first download attempt.

The difference from snapshot download is that a data stream is written directly to stdout in an uncompressed form so that we can mount it directly from zfs recv:

An incremental data stream can be requested using the -I, --from-snapshot option

Automated backup downloads are performed using the backup vps and backup dataset commands. They are used the same way, the only difference being that the former uses the VPS ID as its argument while the latter uses the dataset ID.

These commands require ZFS to be installed, zpool to be created and root permissions. The program can be run directly under root, otherwise it will use sudo when running.

Upon startup, snapshots with the current history identifier are downloaded, as long as they do not exist locally yet. If possible, they are downloaded incrementally. In order for incremental transfer to work, the program must find the snapshot which is present locally and on the server at the same time. This means that backups have to be downloaded at least once every 14 days since the newest local snapshot gets deleted from the server after that time period and the program won’t be able to resume downloading backups – there won’t be any common snapshot.

If the program does not receive the VPS/Dataset ID as an argument, it either asks the user for it or it tries to identify the ID itself. The FILESYSTEM argument always needs to be provided. It should contain the name of the dataset where we want to store the backups.

The first argument of the program is the VPS/dataset ID, which can be confusing if a dataset is used, since the ID is not identical to the dataset name, but both are usually numbers.

Before we actually run the program, the --pretend option might come in handy – it shows us what the program would do, i.e. which snapshots it would download and potentially delete.

The --[no-]rotate option can be used to (de)activate the deletion of older snapshots in order to make room for the new ones. Unless we change other settings, we will have at least 30 snapshots (which currently means 30 daily histories) and a maximum of 45 snapshots (if we create some ourselves) and snapshots older than 30 days will be deleted.

The content of the FILESYSTEM dataset is managed by the program itself and the user should not create more subdatasets/snapshots in it. The downloaded snapshots are placed in subdatasets, which are named according to the history identifier.

We can notice that the program downloads the first snapshot in full size and all the following ones incrementally.

We can access our own data using the special .zfs folder:

This means that the program runs every day at 7:00 AM (at this point, the backups in vpsFree should already have been be moved to backuper.prg) the backups will be downloaded using a maximum speed of 1 MB/s. Cron will send us the output of the command to the email set in the MAILTO variable. However, if we just want to check if it works, it is unnecessary for the email to be sent every day. This is why the program has the --quiet option, which ensures that only potential errors are printed.

If we download the backups using the root user, but vpsfreectl was installed by a standard user, the program has to be installed again with all dependencies.

With default settings, the backup command does not enable us to pause and resume the download since it doesn’t download the data to a file, but it directly sends it to ZFS. If we only have a slow and unreliable connection at our disposal, it can happen that the download fails and it is necessary to start over. However, we can use the --safe-download option to help ourselves. The option first downloads the data as a file and only then does it send it to ZFS. Because of this, the download can be paused and later resumed at any point. The disadvantage of this procedure is that it requires twice as much space on the hard drive since the data is simultaneously stored in a temporary file and the ZFS dataset. The temporary file is created in the folder from which the program is running.

Another problem can be encountered after a long period of downloading. This is because when the program is first started, it downloads all snapshots from the oldest to the newest one. If, however, downloading the oldest snapshot takes too long, it can be deleted from the server, which causes us to be unable to use it for incremental downloads later on and we have to download the full backup again. To solve cases like this one, there is the --init-snapshots N option, which tells the program that we only want to download N most recent snapshots. The safest method is using --init-snapshots 1, then we have 14 days to finish the download (the last pause can occur after 7 days). However, this is no cure-all since if the program is closed and run again on a different day, the last snapshot will be different and the download process will start over unless --init-snapshots has the proper value.

If we don’t want to install or run vpsfree-client using the root user, the program can run under an unprivileged user as well. In this case, sudo is used in order to work with ZFS.

In the following example, we will install and use the program under the user vpsfree. First we create the user and install vpsfree-client:

Add the following lines to /etc/sudoers.d/zfs:

The user vpsfree will be able to run zfs as a root user even without the password, which is necessary if we want to run it using Cron.

Now we’ll try to run the program manually and then move it to the crontab. Let’s try requesting and saving an authentication token:

If you get an error stating that the program doesn’t exist, you will need to specify the whole path or add the correct directory to $PATH. Gems are installed to ~/.gem/ruby/<Ruby version>/, on my system the path to the executables is specifically /home/vpsfree/.gem/ruby/2.0.0/bin.

When we have a working client, we can download the first backup to the dataset that we have created. In this example, VPS #123 will be backed up to the storage/backup/vps/123 dataset.

We will use Cron for regular downloads of further backups. Open the etc/cron.d/vpsfree file and add:

PATH states the directory containing vpsfreectl. Note that we no longer need to provide the VPS ID for the program – the program stores it when it runs the first time.

Downloading Backups Under a Standard User by Delegating Permissions

Solaris/OpenIndiana and FreeBSD enable delegating the permissions to control datasets to various users. In this case, the program does not need root permissions at all, and neither does it need sudo.

We will assign the required permissions to the user vpsfree.

In order for the user to be able to create subdatasets and connect them, the user needs permissions on the directory and file levels:

It is necessary to modify the kernel settings in FreeBSD so that it allows users to mount:

Now we can start downloading the backups. We use the --no-sudo option to ensure that the program doesn’t try to use sudo.

When the VPS is started into a rescue mode, we have access to the VPS's disk “from the outside”, similar to booting a live CD. Unpack the backup to the directory where the VPS's disk is mounted. After the VPS is restarted, it will start from the restored system. In case the backup contains a different Linux distribution than was there before, it is necessary to update the distribution info in vpsAdmin.