Exports of datasets and snapshots

Exports can be found in vpsAdmin main menu as Exports. Export of a dataset can be created from the list of NAS datasets in menu NAS:

Another way is to go to Exports → Export dataset, which will show you a form when you can select which dataset you'd like to export.

Snapshots can be exported from menu Backups → VPS backups or NAS backups:

Each exports has a list of allowed hosts which can mount it. When All VPS checkbox is turned on, the export will automatically track IP addresses of all your VPS and will be updated when IP addresses are added or removed from any VPS. It's also possible to select which VPS or IP addresses will have access and ignore the rest. Each allowed host can have its own export options, such as read-only or read-write mode, see man exports(5) for more information.

The NFS server can be stopped/started on demand, its IP address will remain the same.

One dataset/snapshot can be exported only once, but it can be mounted multiple times on different hosts, even on OpenVZ.

Each export represents a dedicated NFS server, which is used to export selected filesystem or snapshot. vpsAdmin will show you the server's address and path to the exported filesystem. 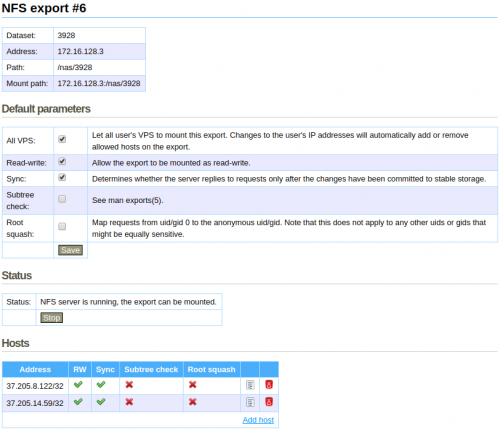 There are also several examples to demonstrate the ways the export can be mounted, e.g. the mount command, entry in /etc/fstab and systemd mount unit. For a successful mount you need to have NFS client utils installed, the package is usually called nfs-client, nfs-utils or nfs-common, depending on the distribution. It's not necessary to install the NFS server. 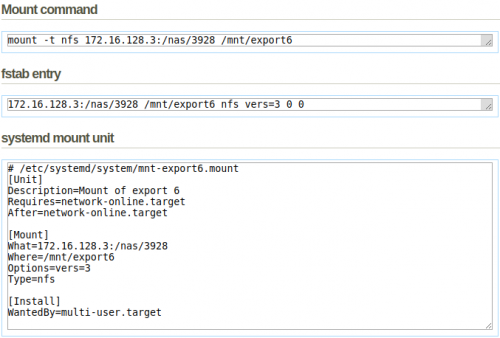 On Debian Buster we found an issue with start of rpc.statd:

Problem is, that none of available protocols has been marked as a visible for library function getnetconfig(3) due to unconfigured proper flag in /etc/netconfig. For correct behaviour of TCP and UDP should those lines look as follows (third column contains v, not -):