When you need to test a new application, configuration, perform a system upgrade in rough or prepare a new production VPS, you can use a playground VPS. Playground is running on a post-production hardware, is not backed up and its lifetime is limited to 1 month. When the expiration date passes, the playground VPS is deleted and you can reate another one. If you need more than a month to test something, please contact the support team.

Playground is a standalone location, like Praha and Brno, which means it has different IP addresses.

What is playground VPS for

What is playground VPS **not** for

Playground VPS can be created in vpsAdmin. You can either create a new (empty) VPS or clone an existing VPS to playground.

A new VPS can be created in section VPS, “New VPS” in the right sidebar. You have to select location as “Playground”. 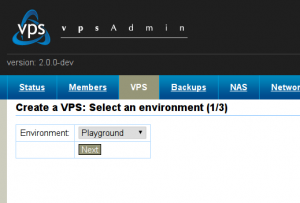 Next, choose parameters of your new VPS and vpsAdmin will create it.

Cloning is useful when you want to test a new configuration of a production system and don't want to risk an outage. The playground VPS will be an exact copy of your production VPS, except it will have different IP addresses.

Go to details of the VPS you wish to clone. Click on Clone VPS in the right sidebar and select Playground as a target environment and location. 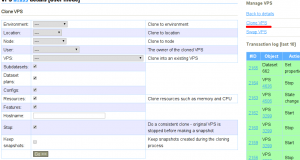 Note that this is possible only if you don't have a playground VPS already. There can only be one and clone always creates a new VPS.

The cloning can take a long time, depending on how much data it has to copy. You can monitor its progress in the transaction log.

Two VPS can be swapped between environments, i.e. between playground a production. Only VPS in different locations can be swapped (Praha, Brno, Playground), because within a single location you can simply swap IP addresses.

It's important to invoke swap from the details of the current production VPS, so that the outage in production is the shortest possible.

vpsAdmin will show you what exactly will happen when the VPSes are swapped. 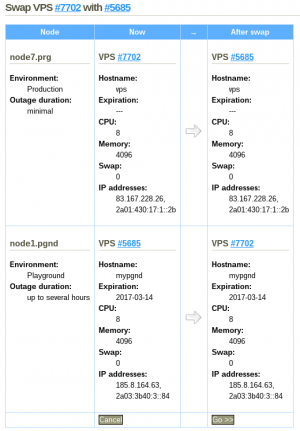 Our DNS servers automatically generate domain names for all playground VPS. It can be used to test new settings when you don't have your own domain.