Everybody has definitely experienced the situation where the system got into a state where it wasn’t able to connect to SSH – be it because of a turned off sshd, incorrectly set rules in iptables or a lost SSH key. Luckily, you can use vpsAdmin to connect directly to the console of the VPS.

The console is available either via an web interface or directly from the terminal using the vpsfreectl utility. If you can choose, I recommend using vpsfreectl to access the console. The console works much more reliably and responsively in the terminal than in a web browser.

You can use the console to follow the process of turning the VPS off and on. Disconnecting from the console does not log the user off unless an intentional logoff takes place before disconnecting.

The console can be used to access the start menu, which appears when the VPS is being started or restarted. 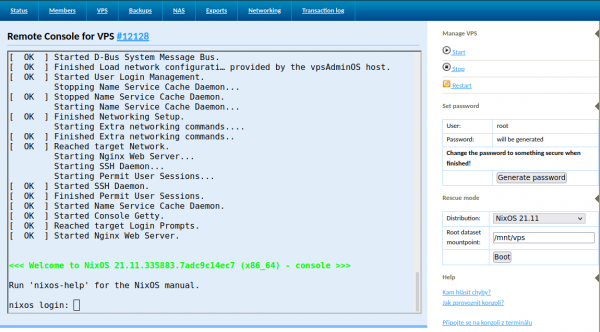 You can access the console through the VPS tab (see screenshot).

The installation process for vpsfreectl is described in the article about our API.

You can connect to the VPS console using the following command:

Here, substitute <VPS_ID> for the ID of the VPS to which you want to connect the console. The console can be closed by pressing the ENTER ESC . keys one after another (enter escape period). This is the only way you can disconnect from the console (other than closing the terminal window).

In order for the console to work as well as possible, it is important for the VPS to have the same locale that is used by the terminal from which you are connected. The most important thing here is encoding – if the two sides use different encoding, certain characters will be replaced by question marks, etc.

vpsAdmin cannot send the $TERM environment variable to the console. However, some TUI apps adapt to the value of this variable. Thus, at first glance it might seem that the app or console is not working properly. For example, in order for the mouse and colors to work in mc, you first need to set TERM=xterm or force this mode using the mc -x option.

You can have the $TERM variable automatically set upon console startup using .bashrc: